We fell in love with Seoul! A very interesting metropolis of 20 million people and definitely worth to visit this city once in your lifetime. Seoul has a rich history, but this city is also super modern.
What we love about Seoul is that it is not overrun by tourists, what makes travelling so much more fun because you will experience Seoul at its best!

Lots to do and see in Seoul

In Seoul, there is lots to do and see. It is a lively and vibrant city!
At home we plop on the couch behind the TV or laptop after dinner, but the streets of Seoul are getting more busier in the later afternoon and evening. There’s always lots of food and interesting things to do, so go out and explore Seoul by night! We loved it!

The culture of the Koreans play a big role in their lives. They have a lot of respect for each other. Especially for the elderly and authorities. They greet everyone with a bending and they are having a hard time saying “no”.
The people in Seoul are “SUPER” nice. Three quarters of the population speaks poor English, but they will always find a way to help you.
That is probably the reason why you won’t see and hear about any crimes in Seoul. It’s a very safe city! Whether in the morning or late at night, you can walk the streets of Seoul without any problem.

Seoul is a very sprawling city. Traveling by subway is also the easiest. Taxis are not expensive, but you are almost always faster by subway. Are you in Seoul and do you want to see much of the city? Then we suggest you to buy a T-money card (available at convenience stores.) This card is very easy to use if you travel a lot with the subway and by bus. Don’t forget to top it up when you are running out of credit! 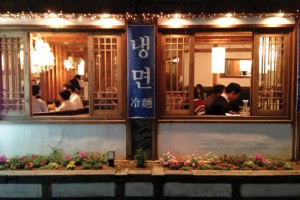 Would you like to experience a real Seoul? Then you definitely can’t skip Insadong! In this area they sell mostly very traditional Korean stuff. It’s the best place …